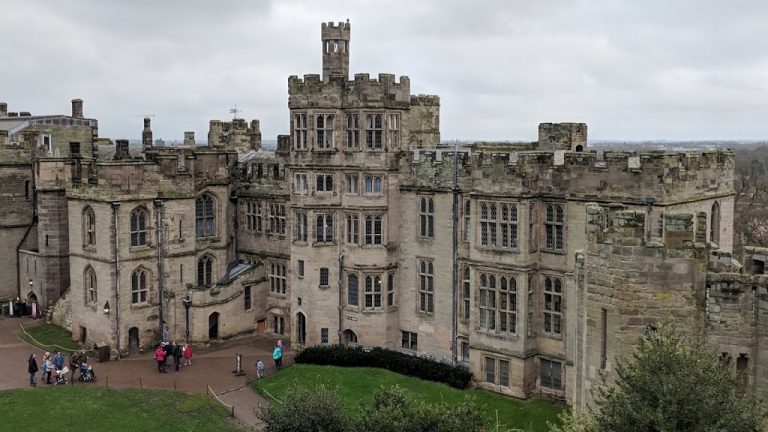 Are you living in or visiting London and thinking of spending a day or two in a nearby county? If that is the case, then look no further than Warwickshire for a family-friendly holiday. Located in the West Midlands and easily accessible by car or train, it is famous for being the birthplace of the Bard.

Years ago, I had a dream of spending time at the house where William Shakespeare grew up. So, when I moved to Birmingham for a year with my family, I made sure that Stratford-upon-Avon was one of the first places I visited. My daughter enjoyed spotting the different clues in the family activity trail booklet. Our first stop was the Famous Beyond Words Exhibition with a word wall showing the most famous Shakespearean phrases from his plays and poems.

Next was the Birthplace Parlour complete with authentic Tudor furniture and wall hangings. Then we had a look at the dining hall where the family would have eaten their meals together. The guide told us that older men used the comfortable armchairs. Women, children and younger men would sit on benches behind them or even stand!

John Shakespeare, William’s father, was a glover by trade and his workshop was actually located in the house. He would have sold his leather gloves, purses and bags from the window of his shop. This gave rise to the term we are all familiar with today – window shopping!

The Birthing Room is where it is believed William and his siblings were born and next door are their bedrooms. I found this old window fascinating. Apparently, early visitors used to scratch their names onto it. It must be an early form revelling graffiti I suppose!

When Shakespeare inherited this house from his father, he added an extension that would become the Swan and Maidenhead Inn. Much like today’s boutique hotels or B&Bs, his friend Lewis Hiccox rented the inn and offered rooms and meals to guests. Our final stop was in the beautifully manicured garden. We were fortunate enough to witness a group of actors performing a scene from Romeo and Juliet.

If you are planning on visiting other properties run by the Shakespeare Birthplace Trust, such as Mary Arden’s Farm, I recommend you get the full story ticket. It gives you unlimited access to all five properties for a year. The adult ticket costs £23 and the child ticket costs £15.

Another family-friendly attraction is the family home of Mary Arden, the mother of William Shakespeare. She lived here until she married John Shakespeare in 1557 and then moved with him to Stratford-upon-Avon. The farm dates back to 1514. It was built by Mary’s father and remains a working Tudor farm to this day.

There’s a family activity trail that we enjoyed completing that took us through the different areas in the house. The kitchen, hall, parlour and bedchambers are all furnished to reflect Tudor times. Since my daughter’s special interests also include animals, we spent a lot of time exploring the farmyard with all the horses, sheep, cows, chickens and ducks. Next to the farmyard is an adventure playground, where we took a break watching her play. Meanwhile, we furiously washed our hands after petting so many animals!

We were lucky to visit during the May bank holiday since the farm had organised a May Day Tudor-style celebration. Since it is a family-friendly event, there were lots of themed activities for the little ones such as wreath making, dancing around the maypole and learning to play Tudor instruments. There was even an appearance by the Greenman – a part of British folklore I personally did not know about. He represents the green foliage associated with this time of the year. Tradition goes that when he appears, the children have to boo him and chase him away!

My daughter really had a blast at Warwick Castle pretending she was a princess and that all these visitors are her guests. She even got to meet some ‘real’ princesses who took us on a fairy-tale adventure at the Princess Tower. Ok they were dressed up as princesses and only pretending, but we couldn’t tell her that!

We went up Time Tower to enjoy the breath-taking views and watch a movie about the history of the castle. We also had a look at the Bear Tower which as its name suggests is where they kept the bears in chains.

The Great Hall and State Rooms have some of the most beautiful oak furniture, wood panelling and lush paintings I have seen in my life.

The Horrible Histories Maze is guaranteed family-friendly fun! It is divided into different eras; Measly Middle Ages, Vicious Vikings, Storming Normans, Slimy Stuarts, Terrifying Tudors and Frightful First World War. Assistance dogs and wheelchairs can be accommodated in the maze. I have even seen some childless adults in there having a blast!

Trebuchet and Birds of Prey Display

The castle is also home to the world’s largest trebuchet. However, we could not see it in action due to a mechanical failure! I could not convince my daughter to watch the Birds of Prey display so instead we rested and had lunch. Bring a picnic with you since you will get hungry walking around the huge complex and climbing all those stairs. There is a restaurant, café and stall but they were a tad overpriced in my opinion.

If you have younger children, they will enjoy the immersive activities at the Children’s Play Village. Make sure to book a session online though to guarantee entry. They organise three sessions every day of the week at 9:30 am, 12 pm and 3:30 pm to access the Play Village. Babies in arms are free, active babies & crawlers are £5 and toddlers & walking children is £9.95 per child. There is a small admission charge of £1 for adults and a maximum of 10 walking children per booking. They even have sessions for children with additional needs.

Since you are already up north, why not visit another family-friendly town such as Coventry or spend a relaxing day or two exploring the Cotswolds.

Make sure you pin this family-friendly blog post so you can find it later:

One thought on “Family-Friendly and Wonderful Warwickshire”