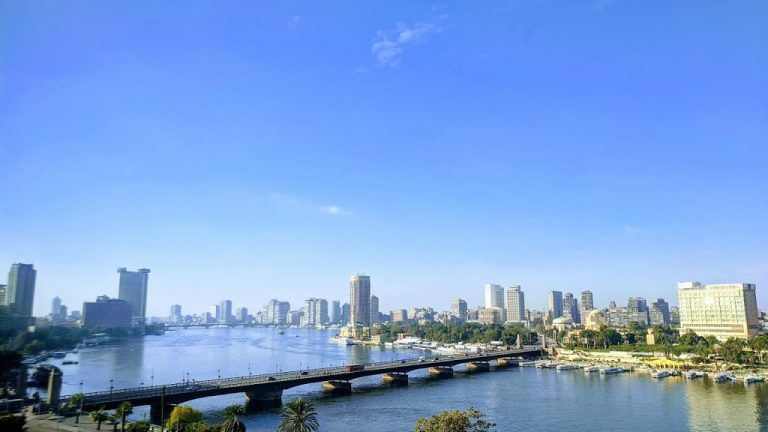 Are you planning on visiting Egypt for a cruise between Luxor and Aswan, or a relaxing beach holiday in Sinai? If the answer is yes, then you might as well drop by Cairo with family for a few days. The capital city of Egypt has been recently named as one of the top 10 cities to visit in 2020 by Lonely Planet. It has been in the same place for more than 1,000 years and is home to over 22 million people. But as a native Cairene, I feel obliged to give you some honest advice on how to survive the beautiful chaos that is Cairo!

Where to stay in Cairo with family

Most of the newer, posher hotels are in East Cairo neighbourhoods such as Heliopolis, Nasr City and New Cairo. However, do not get tempted by their slightly lower rates and fancier amenities. Instead stay closer to the Nile river where all the action is. Aim for hotels in central Cairo in neighbourhoods such as Downtown, Garden City or Zamalek. It will be much easier to visit the different attractions. You won’t be stuck in Cairo’s crazy traffic for half the day!

Ask your hotel concierge or a local friend to help with any bookings for restaurants and events. Most attractions such as museums and galleries have poorly designed and maintained websites. That being said, it is hard to purchase tickets online or find out about their opening hours.

It is also a good idea to have a local friend accompany you when you deal with other locals. Very handy when you are bargaining at the Khan El Khalili market or renting a camel at the Great Pyramids of Giza. This is especially true if you are an all-female group.

Getting around Cairo with family

Please avoid public transportation at all costs – except maybe the underground metro. Even then, make sure you steer clear of rush hours and busy routes. Just Uber everywhere! It is quite reliable and affordable in Cairo, and you might get lucky and find a driver who speaks English. Cairo is unfortunately not stroller friendly at all. If you have a baby with you, my advice would be to leave it at the hotel and carry the baby in a carrier for example.

Things to do in Cairo with family

Located near the infamous Tahrir Square in downtown Cairo, the Egyptian Museum is home to the largest collection of ancient Egyptian antiquities in the world. I have to say that I was surprised that most of the artefacts are not in cases and are not properly labelled. My recommendation is to hire one of the museum guides to help you navigate it. You also have to visit the mummies gallery which has a separate ticket.

You can’t be in Cairo and not see the Pyramids! After all, they are the oldest and only wonder to remain! The complex has three pyramids dedicated to the Pharaohs Khufu, Khafre and Menkaure that were built roughly between 2550 and 2490 BC. Standing guard next to the Pyramids and the solar boat museum is the world-renowned Sphinx. I went inside the Menkaure pyramid a few years ago. It was quite hot and claustrophobic inside but worth the experience. You can also ride a camel or horse, or a traditional horse-drawn carriage if you have young kids with you. But I would strongly advise having an Egyptian deal with the arrangements. I would also recommend you attend the Sound and Light show which is available in several languages.

If your children are obsessed with ancient Egypt, then you must take them to the Pharaonic Village. It is a living and breathing model of the ancient Egyptian way of life whether building, fishing, hunting or mummifying. There are cafés, a playground, a petting zoo and other exhibits so you can easily spend a day there. When I went a few years ago, we got our photos taken at a studio with ancient Egyptian clothes and makeup – a souvenir that I still cherish after all those years!

Built in 1961, the Cairo Tower is one of the tallest buildings in Africa. It was renovated in 2009 and has a revolving restaurant at the top plus a spectacular 360-degree view of Cairo.

If you have a free evening, it might be worth checking the website of the Cairo Opera House and see what is on. There are Egyptian folklore performances, Arabic music concerts and Sufi chanting ensembles.

Go back in time to the Abbasid, Mamluk and Fatimid eras and visit the magnificent mosques of Al Hussein, Ibn Tulun, Al Rifai, Al Azhar and Sultan Hassan to name a few. The Citadel of Saladin is a must-visit as well as the Gayer Andersen Museum and Museum of Islamic Art. My favourite places in Islamic Cairo have to be Al Muez Street and Khan El Khalili market where you can buy traditional souvenirs. Read this article by The Wanderer Pharaoh about an Islamic Cairo walking tour.

Take the underground train to Mari Mina station and visit this deep-rooted part of Cairo which includes the Coptic Museum, the Babylon Fortress and the Greek Church of Saint George. The Hanging Church is one of the oldest Coptic churches and dates back to the 3rd century. There are volunteers inside who speak different languages and can tell more about its history. There are other Coptic churches in the area that you can also visit. Close by, you can also visit the Ben Ezra Synagogue which was converted from an 8th century church in 1115.

The Grand Egyptian Museum is scheduled to open in early 2021. But don’t worry until then there are tens of museums in Cairo that you can enjoy. The museums that I think are child-friendly are the Egyptian Geology Museum, Egyptian Railway Museum and the Agricultural Museum.

Can’t get enough of Egypt?

So you have seen Egypt’s capital but how about exploring other family-friendly destinations in Egypt such as Fayoum or Dakhla? I would do the 2-3 days in Cairo at the beginning of your holiday in Egypt so you can then go on and relax for the rest of the trip. If you do decide to come to Cairo with family, feel free to drop me an email. I would be more than happy to meet up and show you around myself!

Make sure you pin this blog post about visiting Cairo with family so you can find it later:

3 thoughts on “A Guide to Surviving Cairo With Family”