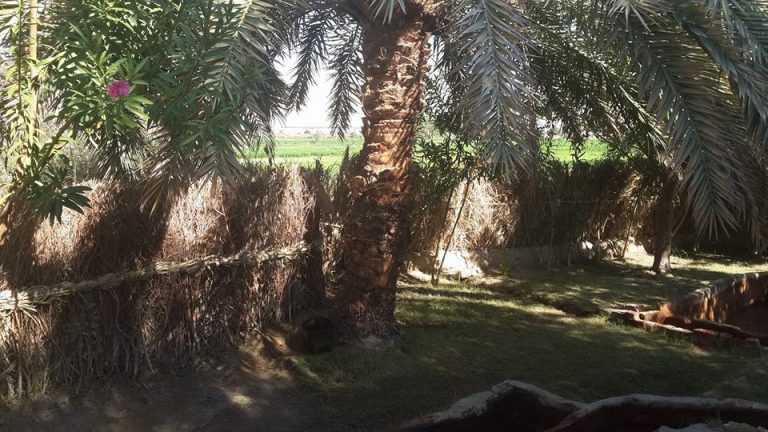 Our family was in desperate need of a winter holiday. While everyone we knew frequented Hurghada, Luxor or Aswan as favourite winter time destinations in Egypt, we decided to be a bit more adventurous and go east! I came across a post on social media talking about the serene Dakhla oasis, one of seven oases in Egypt’s Western Desert, and the rich history and culture of the area. A few phone calls later and we booked what would become a memorable desert adventure.

When to visit Dakhla is up to you as long as you avoid summer! We visited in January and it was toasty during the day but quite chilly at night. So if you prefer warmer weather, perhaps aim to go during the autumn months.

We stayed at the beautiful Al Tarfa Desert Sanctuary said to be Egypt’s first eco-luxury lodge. We were very impressed by the hospitality and knowledge of Mr Wael Abed our host. Not only is he the owner and manager of Al Tarfa, he also happens to be a renowned desert expert, author, lecturer and tourism consultant. The lodge is designed to be both traditional and luxurious at the same time. Once you arrive and check in, it is hard not to see why it has won several international awards. The furniture and decor in our spacious suite celebrates local artisans, talents and tastes.

How to reach Dakhla

If you stay at Al Tarfa (which I highly recommend you do!) they can also handle your transportation. Their package includes airplane tickets from Cairo airport to the airport in Kharga oasis followed by a car and driver to Dakhla oasis. The overall journey that way would be under four hours. This would be much better than driving all the way from Cairo and you won’t have to worry about the logistics.

What to pack for your desert adventure

Take comfortable clothes and shoes for the expeditions during the day. If you want to use the swimming pool or spa, then make sure you bring appropriate attire. Bear in mind that the rooms have no TVs and the Internet can be sketchy in the middle of the desert. Perhaps bring a good book to read in the evenings while you snuggle next to the fireplace or some board games for the kids to play. Don’t worry if you forget though because the lodge has a modest library in its lounge and bar area.

What to do on your desert holiday

Get to know the history of Dakhla oasis

On our first night, Mr Abed gave us a stunning presentation about the history and significance of the oases in the Western desert. He shared tens of rare photos, maps and manuscripts and told fascinating stories about the early desert explorers and their expeditions. He also spoke about the local community in Dakhla oasis and how Al Tarfa is supporting it.

Discover the Dakhla of ancient times

We visited an area half an hour away from the lodge called “Al Mozawakka” which is Arabic for ornate. It is named so in reference to the wall paintings in the ancient Egyptian tombs. There are literally hundreds of them in the area and they are always discovering new ones. We were lucky enough to enter two of them which belonged to officials from the Ptolemaic period (300 – 30 BC).

We also visited an ancient Egyptian temple called “Deir El Hagar” or Temple of the Stone. It dates back to Roman times and was later used as a church by new converts to Christianity. You can see how crosses were carved onto the stone pillars and altars. The temple also has what is considered one of the oldest examples of Coptic iconography.

This city dates back to the Ayyubid dynasty that ruled Egypt from the late 12th to the early 13th centuries. The monuments include a mosque, school, courthouse and mill.

The houses have long been evacuated because they are not safe anymore for the locals. They are in desperate need of renovations but as you know this is also quite costly.

The wooden slabs, or lintels as archaeologists like to call them, carved with intricate calligraphy and hung above every door, are now unfortunately a lost art form.

Enjoy the sound of silence

The lodge arranged for us to visit the “Ramla” which is the name of the breathtaking Dakhla dunes and means sand in Arabic. We enjoyed some wine and fruits while listening to our guides tell stories of their different tribes and villages.

On our way back to the airport in Kharga oasis we stopped to visit a pottery factory. In old times, these urns would be used to carry and store water. Nowadays, people use them to raise rabbits and pigeons. Next door, a local artist showed us his clever creations out of palm tree trunks. Local women proudly displayed their hand-woven carpets, hats and baskets – perfect souvenirs for family and friends back home!

If time is on your side, perhaps you can stay longer in Kharga oasis or explore another oasis or two such as Siwa or Fayoum. This is definitely a trip our family would want to repeat hopefully soon.

Pin this post about Dakhla so you can return to it later!